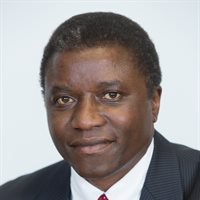 Chaloka Beyani is an Associate Professor of International Law in the Law Department, a member of the Centre for the Study of Human Rights and Chair of its Advisory Board, and a member of the Centre for Climate Change at LSE. He is also the United Nations Special Rapporteur on the Human Rights of Internally Displaced Persons. He joined the Department of Law at LSE in 1996 and lectures in international law and human rights. He was formerly a Research Fellow at Wolfson college, Oxford, with Lectureships in Law at Exeter and St. Catherine’s colleges, Oxford, and a Crown Prince of Jordan Fellow, Queen Elizabeth House, as part of the Refugee Studies Centre, Oxford.

Chaloka is a recognized international and United Nations expert on internally displaced persons, population transfers, mercenaries and private military companies, sexual and reproductive health, the human rights based approach to development, climate change, making treaties, and making constitutions. He has served as a legal adviser and expert to the Office of the High Commissioner for Human Rights, the Office of the High Commissioner on Refugees, the World Health Organization, the United Nations Population Fund, United Nations Development Fund for Women, the European Union, the Commonwealth Secretariat, and the African Union.