High Commissioner for Rwanda to the UK 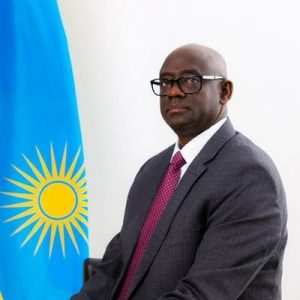 His Excellency Johnston Busingye assumed his duties as High Commissioner for Rwanda to the Court of Saint James on 29 March 2022 when he presented the working copies of his Credentials to the Vice-Marshall of the Diplomatic Corps and Director of Protocol at Lancaster House and now awaits the presentation of his Letters of Credence to Her Majesty The Queen Elizabeth II.
Prior to his appointment as High Commissioner, he was the Minister of Justice and Attorney General of the Republic of Rwanda, a post he served for nine years.
He served as the Secretary General for the Ministry of Justice, and among other duties, had oversight of the National Prosecution Service, National Prison Service, National Notary Service, and the Criminal Investigation Department, prior to being appointed President of High Court in Rwanda and as Principal Judge of the East African Court of Justice.
Mr. Johnston Busingye studied law and has practiced as an advocate in several institutions in Rwanda and in East Africa. He has played a vital role in the justice sector in Rwanda and in East Africa in general.

Mr Johnston Busingye is married to Phoebe Murerwa and is father to six children.