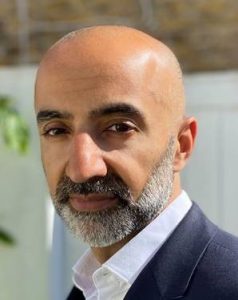 Shehzad Charania MBE is the GCHQ Director of Legal Affairs and International Relations.  He joined GCHQ after five years at the Attorney General’s Office, including nine months as its head, where he advised four Attorneys General and three Solicitors General. During this time, he was also the International Law Adviser to the Prime Minister’s Office.  He spent six years at the Foreign Office, including three and a half years posted to the British Embassy in The Hague as the Head of International Law.  Shehzad began his Government career at the Treasury Solicitor’s Department (now the Government Legal Department) where he led some of HMG’s most sensitive and high-profile national security litigation.  Shehzad began his legal career in the city where he worked for a magic circle law firm and two investment banks.  Shehzad has been the National Security Community’s Race Champion since 2019.  He is a trustee of the British Institute for International and Comparative Law, a member of its Public International Law Advisory Panel, and a regular lecturer on various international law topics.