Vice-President, International Tribunal for the Law of the Sea 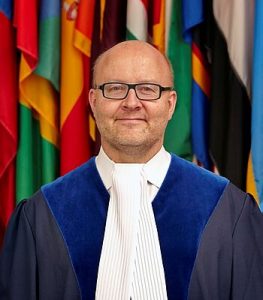 Tomas Heidar (Iceland) is Vice-President of the International Tribunal for the Law of the Sea (ITLOS). He has been Judge of the Tribunal since 2014 and was President of the ITLOS Chamber for Fisheries Disputes 2017-2020. He is a Member of the ITLOS Special Chamber in the Dispute concerning delimitation of the maritime boundary between Mauritius and Maldives in the Indian Ocean.

From 1996-2014, Tomas Heidar served as Legal Adviser of the Ministry for Foreign Affairs of Iceland, attaining the rank of Ambassador. As such he was responsible for all matters of public international law and represented Iceland regularly at meetings on ocean affairs and the law of the sea at the United Nations and in other international fora.

Tomas Heidar is also Director of the Law of the Sea Institute of Iceland and Co-director and lecturer of the Rhodes Academy of Oceans Law and Policy. He lectures at the University of Iceland and many other universities and institutions around the world, including Queen Mary University of London, University College London, the British Institute of International and Comparative Law, the IFLOS Summer Academy and the Yeosu Academy of the Law of the Sea. He has taught law of the sea at the United Nations Regional Course in International Law in Ethiopia.