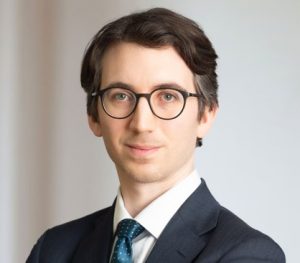 Sean is recommended in the Legal Directories as a leading junior for PIL and international arbitration (Chambers and Partners (Global Guide) and Legal 500). In this year’s entries, he is described as having “an absolutely first-rate mind, excellent sense of judgement and knowledge of PIL”, being “terrific on detail”, and “very knowledgeable about public international law, rigorous in his research, and good to work with”. Who’s Who Legal adds that Sean is a “superb barrister” “who peers variously describe as ‘very able’ and ‘a great team player’” and “sources describe him as ‘clearly one of the leading juniors in international public law’”. He has been nominated for international arbitration junior of the year twice (in 2019 by Chambers UK and in 2018 by Legal 500).

Sean was appointed Junior Counsel to the Crown (the UK Attorney General’s Public International Law B Panel) in 2017, and he previously worked as an Assistant Legal Advisor to the UK Foreign and Commonwealth Office.

Sean’s advice on matters of public international law has been cited in national UK newspapers (see here and here in relation to the UK’s withdrawal from the EU Treaties), and he recently gave joint written evidence to the UK House of Lords (see here).

Sean previously held positions at the University of Cambridge (as a Bye Fellow in Law and supervisor in European Union law at Downing College, Cambridge in 2010-11), Harvard Law School (as a Visiting Scholar (EALS) in 2012) and Pepperdine University School of Law (as Adjunct Professor in Public International Law from 2015-17).

He is a committee member of ALBA and previously completed a traineeship at the European Court of Human Rights.