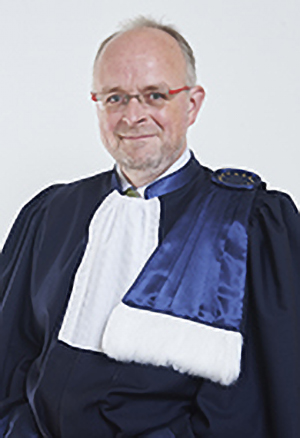 Judge Tim Eicke is the current judge elected in respect of the UK of the European Court of Human Rights (ECtHR). A dual British/German national he studied law at the University of Passau, Germany and the University of Dundee, United Kingdom, where he graduated with an LL.B. (Hons) in English law.  He became a Barrister in London in 1993, a Q.C. in 2011, a Bencher of Lincoln’s Inn in 2014 and joined the ECtHR on 12 September 2016. He formerly served as Junior Counsel to the Crown as well as on the panel of counsel for the Equalities and Human Rights Commission. He was also long-time editor of the European Human Rights Reports.

Before taking up his current position he practised at Essex Court Chambers in the fields of public and constitutional law, human rights law, EU law and public international law and regularly appeared in the European Court of Justice, ECtHR as well as the domestic courts including the UK Supreme Court. He currently is a Member of the American Society of International Law and of the Public International Law Advisory Panel of the British Institute of International and Comparative Law. He holds an honorary degree of Doctor of Laws (LLD) from the University of Dundee (2017).