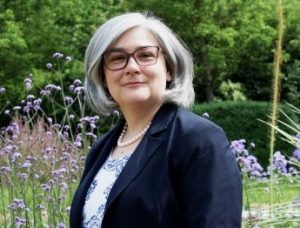 Professor Olympia Bekou is Professor of Public International Law and Head of the School of Law. She also heads the International Criminal Justice Unit of the University of Nottingham Human Rights Law Centre.

Olympia joined the School of Law in September 2002 and currently teaches International Criminal Law. Over the years, Olympia has been a fellow of the Max Planck Institute for Foreign and International Criminal Law in Freiburg, Germany, and she has also held visiting positions at the TC Beirne School of Law, the University of Queensland, Australia, the University of Nantes, France, and Istanbul Bilgi University, Turkey. She has presented her research in over 40 countries around the world and is a frequent speaker in expert meetings, workshops and conferences.

Olympia has provided research and capacity building support for 63 States, intensive training to more than 75 international government officials, drafting assistance to Samoa (with legislation enacted in November 2007), Fiji, and Jamaica, and has been involved in training the Thai Judiciary. In recent years, Olympia’s work has focused on capacity building and has undertaken numerous field missions in post-conflict situations such as Colombia, the DRC, Liberia, Sierra Leone, and Uganda.

She also sits on the board of the Swiss-based NGO Civitas Maxima and the Liberian-based NGO Global Justice and Research Project with whom she has worked on the establishment of a War and Economic Crimes Court in Liberia.

Olympia has extensive experience in the management of large research grants. Between 2013-2016, she led the Nottingham component of a three-year EIDHR-funded project entitled: ‘Enhancing the Rome Statute System of Justice: Supporting National Ownership of Criminal Justice Procedures through Technology-Driven Services’, under which she created the Cooperation and Judicial Assistance Database (CJAD) and also worked in conflict-related sexual and gender-based violence in the DRC, ICC ratification efforts in Indonesia and issues of command responsibility in Colombia. Olympia’s research has been funded by the EU, the Foreign and Commonwealth Office, the ESRC, and others.

In 2008, Olympia was the joint recipient of one of seven University of Nottingham Knowledge Transfer and Innovation Awards for a project entitled: ‘Towards a successful partnership: the ICC Legal Tools and the European Union’.

In 2014, she was awarded the University of Nottingham Knowledge Exchange and Innovation Award for Societal Impact in Social Sciences for her work ‘Fighting Impunity through Technology: Strengthening the Capacity of National and International Criminal Justice Institutions to Investigate and Prosecute the Most Serious International Crimes’. In 2015-2016 Olympia was recognised as an Impact Leader as part of ESRC’s impact leaders programme.

Professor Olympia Bekou has over eighteen years of professional experience in national and international criminal justice. She has considerable experience in working with international criminal justice institutions, the European Union (including COJUR-ICC, EU Genocide Network, COHOM, DROI), States and civil society organisations. Olympia has recognised training, knowledge transfer, capacity building and bilateral assistance expertise, including in post-conflict situations (Colombia, the DRC, Liberia, Sierra Leone and Uganda) as well as legislative drafting experience (Samoa). Olympia has contributed to the work of the International Law Commission on the drafting of the Crimes Against Humanity Convention and to the multi-State negotiations of the Mutual Legal Assistance Treaty.