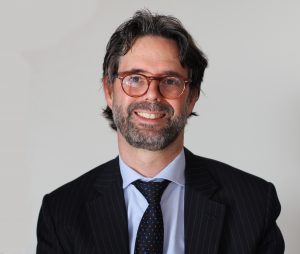 Holger Hestermeyer is a Professor of International Law and EU Law at King’s College London and Director of its Centre for International Governance and Dispute Resolution. He has served as specialist adviser to the EU Select Committee of the House of Lords and has given testimony to various committees of the House of Commons and House of Lords as well as to the Scottish Parliament and the German Bundestag. Holger is admitted to the German and New York Bar and advises on international and EU law.

Holger has published widely on international, EU and constitutional law in English, German and Spanish, amongst others a monograph on Human Rights and the WTO (OUP 2007, translated into Farsi and Vietnamese) and on comparative federalism (Mohr Siebeck 2019). His research was awarded an Otto Hahn Award and the ISUS prize. He currently serves as one of the general editors of the six-volume commentaries on world trade law (Brill, 2022).

Before joining King’s Holger was a Référendaire at the Court of Justice of the European Union and a research group leader at Heidelberg’s Max Planck Institute for Comparative Public and International Law. He has served as Co-Vice-President of the Society of International Economic Law and as co-director of the Red Latinoamericana de Derecho Económico Internacional.