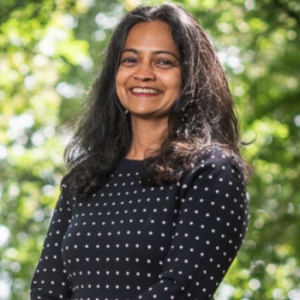 Lavanya Rajamani is a Professor of International Environmental Law, Faculty of Law, University of Oxford, and Yamani Fellow in Public International Law, St Peter’s College, Oxford. She was formerly a Professor at the Centre for Policy Research, New Delhi, where she now holds a Visiting Professorship. Before that she was a University Lecturer in Environmental Law, and Fellow & Director of Studies in Law at Queens’ College, Cambridge. Lavanya holds an LLM from Yale, a DPhil and BCL from Oxford, where she was a Rhodes scholar, and a B.A.LL.B. (Honours) from National Law School, Bangalore, where she graduated at the top of her class with several gold medals.

Lavanya serves as Coordinating Lead Author of the chapter on ‘International Cooperation’ in the Sixth Assessment Report of the Intergovernmental Panel on Climate Change. She has also served as Rapporteur for the International Law Association’s Committee on Legal Principles Relating to Climate Change, and as Research Director for the Hague Academy of International Law’s Centre for Studies and Research.

Lavanya’s academic work on the international climate change regime is informed by extensive practice. She has worked on and tracked the climate negotiations in different capacities, including as a negotiator for the Alliance of Small Island States, and legal advisor to the UN Climate Secretariat, the Danish Ministry of Climate Change and the Indian Ministry of Environment and Forests. She was part of the UNFCCC core drafting and advisory team at the 2015 Paris negotiations, and, was identified by Climate Home News as one of the ‘Women to watch ahead of the UN’s 2015 Climate Summit.’ She is also involved in differing capacities, but in particular in providing the evidence base, in current and prospective climate cases before national and international courts. She is currently external counsel supporting the Government of Vanuatu in its pursuit of an Advisory Opinion from the International Court of Justice on the climate crisis.